If you’re shopping for a compact sedan there are at least a couple of obvious options out there.

It’s forgivable if the 2020 Nissan Sentra doesn’t count among them, but it makes a good case for why it probably should, the overhauled four-door a vastly improved product that’s suddenly – and somewhat surprisingly – up to the task of taking on the segment’s best.

As far as small sedans go, the redesigned Sentra is a real looker. The resemblance to the larger Altima is obvious, with the same flowing proportions from tip to tail. SR and SR Premium models, meanwhile, are offered with a black contrasting roof – a simple solution that adds another splash of style.

This tester’s orange exterior hue sets a tone that carries inside, with similar contrast stitching throughout the cabin. While the faux carbon-fibre accents are a little disingenuous, compared to other entries in the segment the interior space is more than an afterthought, with stylish touches just about everywhere.

Nissan makes a big deal about its so-called zero-gravity seats, though whether the hype is real is up for debate. They are, however, fairly comfortable despite their lack of contouring, proving supportive over the course of a multi-hour drive.

The front seats are heated in all but base models, though the SR Premium’s fake leather upholstery doesn’t feel quite as nice as other examples on the market, including what’s in Nissan’s own Kicks crossover. Dual-zone automatic climate control also comes in every trim but the cheapest one, though not even the most expensive version gets air vents on the back of the centre console, settling instead for floor ducts under the front seats.

Road noise is mostly kept to a minimum over all but the most porous of pavement, but wind noise can be rather loud for such a sleek sedan. Other audible annoyances materialized during testing, too, with a metallic chirping emanating from the engine bay under moderate throttle, and a severe rattling in the dome light between driver and passenger. The latter was solved with a quick adjustment, but the former was along for the ride all week.

Those unfortunate quality concerns aren’t in keeping with the rest of the car’s build quality, which is excellent overall. While some of the interior plastics feel a little less than stellar, the panel gaps are tight both inside and out. It might not be mistaken for a Mercedes-Benz A-Class anytime soon, but that’s okay considering it’s significantly less expensive.

Testing the top SR Premium trim brought with it the full gamut of features – eight-speaker stereo, surround-view monitor, and that faux leather upholstery – but plenty of desirable equipment is included in cheaper versions. As far as creature comforts go the base car doesn’t offer much, but there’s push-button start and tons of advanced safety features.

Every version of the 2020 Sentra comes fitted with an array of advanced safety features, though the package isn’t quite as robust as what’s included in the segment-leading Honda Civic and Toyota Corolla. While stuff like blind-spot monitoring with rear cross-traffic alert, forward automatic emergency braking with pedestrian detection, automatic high-beams, and reverse automatic braking is all standard, lane-departure warning is included rather than lane-keep assist. The Civic and Corolla also include adaptive cruise control on all trims, while the base Sentra comes with a conventional system instead.

Otherwise, there are 10 airbags peppered throughout the cabin, and a government-mandated back-up camera, though the live image of what’s happening behind the car is somewhat dark and low-resolution. The same goes for the surround-view display that’s included with the top SR Premium trim – a problem noted during testing of the Nissan Kicks, too.

Regardless, those camera views come in handy when parking the compact Sentra, which has something of a compromised rearward view due to its high parcel shelf and trio of fixed headrests in the back. Forward and side views suffer no such issues, however, with narrow A-pillars and large windows providing adequate views of what’s happening outside the car.

Cabin controls follow an intuitive layout, with physical buttons and dials where they should be on the dash, and a smattering of switchgear on the steering wheel, too. Better still, it all makes sense and comes boldly identified to avoid confusion. While Nissan’s infotainment interface isn’t among the best around, the touchscreen is responsive to inputs – though initial loading times can be slow as Apple CarPlay starts up.

Part of the problem with the view through the Sentra’s rear window – the height of the ledge behind the back seat – has a silver lining when loading the sedan with cargo. At 405 L, the deep and wide trunk is up there with both the Civic and Corolla and comes close to what’s offered by larger cars like the Toyota Camry. The trunk opening itself is absolutely massive and made easy work of autoTRADER.ca’s cargo-measuring pedal car, Pattie. Sadly, there’s no centre pass-through, though the opening that connects the cabin to the cargo area when the 60/40 split seats are folded is large enough to add some usability.

The front half of the cabin is roomy, with enough width to keep driver and passenger from rubbing elbows – and there’s a large covered console bin to store personal items. With the available sunroof there’s still enough headroom for taller occupants to get comfortable in the low-slung seats without claustrophobia creeping in, but only barely so. The back of the cabin is also spacious, though the sloping roofline cuts into headroom for adult passengers.

Like any compact sedan, the Sentra is best suited to solo missions – not that it can’t handle more than that, but it’s built to be a commuter car first and foremost. And it manages to be great in that regard, with a ride quality that’s not far behind the best-in-class Corolla.

Riding on a new platform and utilizing a multi-link rear suspension for the first time in a few generations, its on-road aptitude might well be the Sentra’s biggest improvement point. Smooth and composed in most scenarios, the small sedan does an outstanding job imitating a premium car in the quality of its ride.

The suspension is tuned for a firm feel while still working to absorb rough roads before they reach the cabin and disturb the drive too much. It’s not quite perfect, but the ride quality is better than most in the class. It comes across as weighty and well built but not heavy – an important distinction that helps deliver that upmarket quality. The steering, too, is smooth and boasts the right amount of resistance, though there isn’t much feel when the car is driven hard through a winding road.

The powertrain isn’t exactly up to that challenge either, though it wasn’t designed to be. It might come across as fairly underwhelming on paper; and, indeed, it will be to those with fond memories of some of the sporty Sentra models of old. But when viewed for what this version actually is – an economy car – the setup is all but perfect.

Gone is the 1.8L engine of old, replaced with a 2.0L that offers enough output to be competitive with the average entry in the segment. With 149 hp and 145 lb-ft of torque to work with, it’s peppy enough to keep confidence levels up when passing on the highway even if it can’t do so especially quickly. The continuously variable transmission (CVT) never feels especially strained, though it’s quite loud and buzzy when the engine’s working hard. However, there’s virtually none of the stretching, rubber-band sensation typical of this type of transmission – a trait that’s long been common to Nissan’s transmissions in particular. It seems the automaker has finally solved the CVT riddle, and the Sentra’s better for it.

Drive mode selection is limited to normal or a button-activated eco setting, the latter adjusting throttle and transmission mapping to burn less gas. Driving with eco mode engaged for much of the week saw the Sentra return a combined 7.8 L/100 km over the course of nearly 700 km of driving.

Those real-world results skew closer to the Sentra’s city consumption rating listed by Natural Resources Canada (NRCan) – logical given much of the test week was spent in town traversing some of Toronto’s most congested arteries. Regardless, they weren’t much different than what this author was able to achieve in the slightly more powerful Toyota Corolla SE Nightshade.

Miserly though the numbers may be, fuel consumption isn’t the only way the 2020 Sentra stays competitive with the likes of the Corolla. Skirting the cheapest manual-only version and its $18,798 starting price – like all automakers, Nissan uses a model most shoppers won’t buy as enticement – yields a trio of trims that are priced well next to rivals from Toyota and others.

When it comes to the Civic and the Corolla there’s a reputation for reliability that spans decades – and in fairness, it’s mostly been earned by both cars. While the Sentra doesn’t necessarily share the same notoriety, it’s easy to forget that this little Nissan’s been on the market for nearly 40 years straight. That longevity doesn’t guarantee that this is a car that’s ready to be driven into the ground, but it does bear some significance in an ever-shrinking segment that’s long been dominated by two cars in particular.

The Sentra’s certainly undergone its fair share of changes over the years, but it enters its eight generation as a tremendously better car than the one that came before it. It’s more stylish than ever – it may even be the most stylish car of its kind on the market right now – and is filled with all the right features to give those segment stalwarts a serious run for their money. 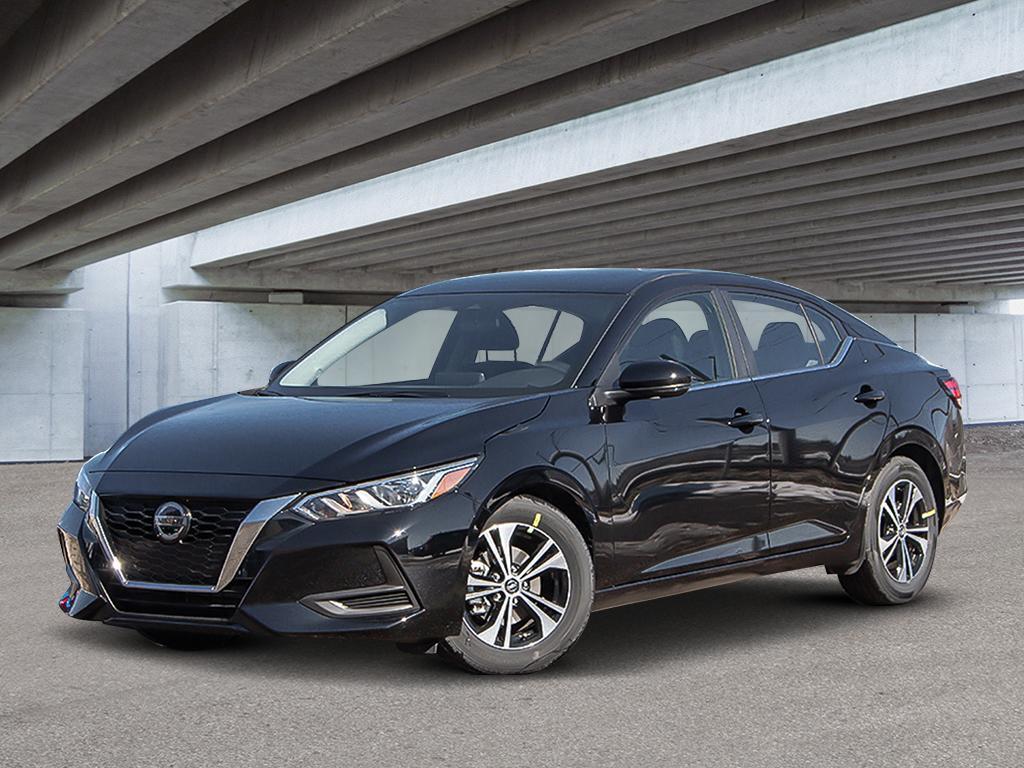