For city-dwellers, driving brooding SUVs can be something of a chore, making something smaller a better fit – especially when navigating narrow roads lined with cars or packing into tight parking lots.

“Compact” used to carry the stigma of being cheap or boring, but luxury automakers have started providing premium options in smaller packages. Such is the case with the 2020 Lexus NX and Cadillac XT4, two crossovers designed to showcase the finer features of motoring in right-sized dimensions. Essential to success in this segment is practicality, high-tech features, and top-notch styling, not to mention good value – because who doesn’t love a deal?

The Lexus NX was one of the first competitors in this class of compact crossovers and it has a pretty good track record, offering two powertrains to go along with a polarizing design. The XT4 is a newer entry, with plenty of modern touches to be found inside and out.

With its large chrome grille and blacked-out accents, the NX definitely draws attention, though some may be put off by the aesthetic aggressiveness. Most noticeable is the way the lower grille recesses inward, giving the NX a bit of an overbite. The pearly white paint finish seen here complements the NX’s black wheels and taillight surrounds, while the profile evokes the brand’s larger and well-known RX model.

The XT4 doesn’t have a lot of character in comparison, but at least it’s not as polarizing. The front end looks very much like the rest of the Cadillac lineup, while the clipped rear end provides a coupe-like profile. The Sport model tested also has a few unique accents including a blacked-out grille, body-coloured door handles, and clear taillights, which provide a more modern aura. The large 20-inch wheels fill out the wheel wells with confidence, letting the XT4 look less rugged and more premium.

A swoopy dash design, pleasing mix of materials, and chunky steering wheel can’t totally save the interior of the NX from feeling a bit dated in comparison to the Cadillac. A particular pain point of the vehicle’s interior design involves the touchpad-controlled infotainment system. However, I like a few of the clearly labelled and laid-out controls like the HVAC switchgear. But many other buttons are found haphazardly throughout the cabin and are a bit of an eyesore. While physical buttons and knobs are important for ergonomics, they need to fit the premium motif that Lexus is going for, and that isn’t the case here.

The XT4 tested here features attractive upholstery, finished in a mix of black and bright tan leather with contrasting stitching. The buttons and controls are nicely integrated, though some toggles aren’t clearly identified, which could lead to some confusion. With its many screens, the XT4 comes close to information overload, but they fit the cabin and are ergonomically sound. Speaking of modern technology, the armrest features a slot for wireless phone charging, which helps to hide the potentially distracting device from  the driver’s peripheral vision.

The Lexus feels practical for a compact crossover, but the numbers say otherwise. It features less head- and legroom in the front and rear seats than the Cadillac, and the storage space behind the rear seats is lacking, too, with just 500 L of capacity. Fold down the rear seats, though, and you get a total of 1,546 L, over 10 per cent greater than in the Cadillac. In practice, the headroom is a noticeable limitation, and the rear seats aren’t nearly as accommodating.

Lexus has a few hits with its technology suite, including an adaptive cruise control feature that works well with its own dedicated mini-stalk for controlling the set distance and speed. The infotainment screen is perched high on the dashboard, allowing it to be easily seen while driving. And while Lexus now boasts Android Auto and Apple CarPlay compatibility with its infotainment system, using the touchpad to get anything done on the screen is a headache. Users should opt to use the voice recognition system instead if that works for them. Both crossovers have the requisite features expected in this segment, including heated and ventilated front seats, and heated steering wheels.

The Cadillac XT4 has a slightly more high-tech cabin with more features. Our tester had massage seats, a head-up display, and a camera-based rear-view display in the mirror, boasting a wider viewing angle than the normal optical mirror. It also featured automatic parking assistance for perpendicular and parallel spots. The parking system triggers an impressive camera array with extra viewing angles to place the XT4 in trickier spots.

The touchscreen in the Cadillac is bigger and it seems to have a higher-resolution display, making its experience far better. Our tester also came with a huge panoramic sunroof and an upgraded sound system. One downside for the XT4 tested was the absence of adaptive cruise control. While there was a gap adjust button on the steering wheel, it seemed to control the forward-collision warning system rather than the adaptive cruise control feature.

Smooth and efficient, the Lexus UX 300 uses a 2.0L turbocharged four-cylinder engine making 235 hp and 258 lb-ft of torque. It’s paired to a six-speed automatic transmission and features paddle shifters for manual control of the gear selection. Power delivery is nice and smooth, though not urgent. All NX models in Canada come standard with all-wheel drive (AWD), and there is a trio of drive modes (Eco, Sport, and Normal) for a more personalized driving experience. Lexus also offers a hybrid model for those who prefer fuel economy to torque.

The Cadillac also features a 2.0-litre turbocharged four-cylinder engine, though it’s matched with a nine-speed automatic and an AWD system that lets you leave it in front-wheel drive for better efficiency. The motor puts out 237 hp and 258 lb-ft of torque, which is all too similar to the Lexus, but the extra gear ratios mean that the vehicle feels a bit more responsive in almost every condition.

Both crossovers feature combined fuel consumption ratings of 9.7 L/100 km, which is an interesting wrinkle in this comparison. The highway and city figures differ only slightly, and we found the Cadillac to be slightly less efficient in our identical test drives of the two. There are a few factors that may lead to this experience, from tires to the frequency of automatic engine stop-start activations, but even the curb weight of the two cars are within 12 kg of each other. While the Cadillac did seem like a more responsive vehicle, it also was less efficient in practice.

Despite featuring as much cargo space as a Volkswagen Golf, both of these vehicles feel a bit less sprightly than a compact hatchback. The Lexus feels more mature and refined. A weighty steering wheel leads to that impression, as does the more reserved feel off the line. It’s also worth pointing out the general buttoned-down feel of the chassis, and the limited noise and vibrations experienced while driving.

The Cadillac feels a bit more unwieldy and behaves like a bigger vehicle even though it’s about the same size. Its light steering leads to plenty of mid-corner corrections, and the quick action of the steering didn’t bode well for the car’s soft suspension. The vehicle ends up feeling a bit floaty at times. While some luxury buyers might appreciate this trait, the cabin does seem louder, with more engine, tire, and wind noise than the Lexus.

The Insurance Institute for Highway Safety (IIHS) has thoroughly tested the Lexus NX and awarded it the highest honour possible: a Top Safety Pick+ rating. This is due to the vehicle’s solid crash tests, the availability of crash prevention technology, and its bright headlights. The institute does note that the vehicle has just acceptable child seat anchors, with the middle seat being a bit tight and lacking a lower anchor, but that’s typical of this class.

The XT4 has yet to be fully tested by the IIHS, but it seems promising. The vehicle has excellent test scores for its moderate-overlap crash test as well as the side-impact crash tests. While we felt the headlights are pretty good and the vehicle comes with OnStar connectivity, the Lexus offers its safety features as standard equipment, while many safety-oriented systems are optional on the XT4.

The Lexus NX 300 features a base price of $48,300 before freight and other charges. For that price, you get standard AWD and a suite of advanced safety features that includes adaptive cruise control and automatic high-beams. This base price can balloon up to $57,600 if you opt for a model with the F Sport Series 3 package. These higher trim level models feature a sportier suspension and a few high-tech add-ons like a head-up display. Our tester was more modestly equipped, with the Black Line Edition package that adds all those slick black exterior accents. As a result, it costs $50,750 before the $2,075 freight and PDI fee.

Cadillac offers the XT4 with front-wheel drive for those who want a low starting price. That version starts at $35,398 before any other fees and taxes. Adding AWD brings the price to $38,798. There are two other trims offered with AWD: the Premium Luxury and the Sport, and both feature the same price of $43,398. Our Sport tester featured $15,000 in options, including the so-called Sun and Sound Package, which added a large sunroof and upgraded sound system; the Comfort and Convenience Package, which added features like ventilated and massage front seats; and the Technology Package, which adds a HUD and wireless phone charger. The total price before the $2,100 freight charge is $58,318.

More responsive and spacious, and with more technology, we can give a slight edge to the XT4 in this comparison, but the Lexus NX is still a worthy option in this segment thanks to its refined feel and better standard equipment. We’re still wary of the look and the infotainment system, which leads us to recommend the Cadillac this time around. But both deliver lots of luxury in a city-sized package. 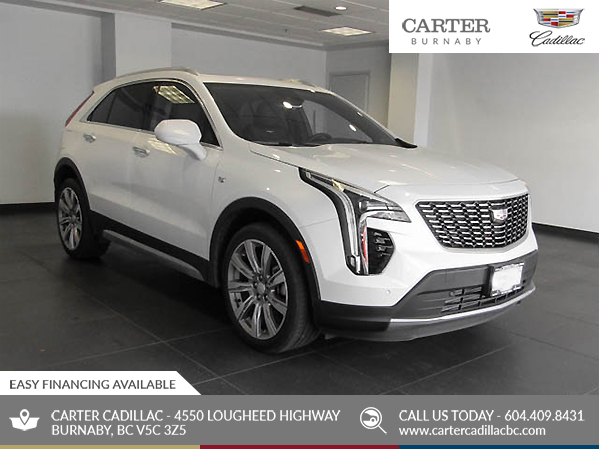